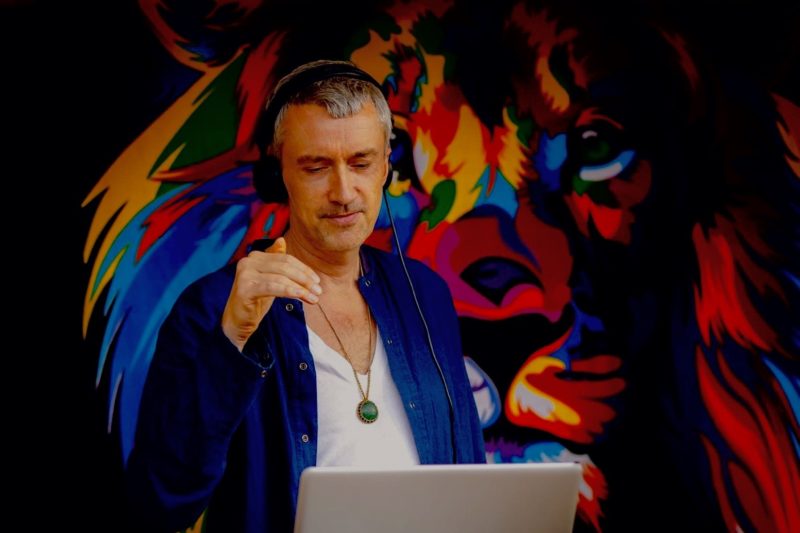 Agape Zoe: Thomas, the premiere of the festival in Munich will also be your first time at Agape Zoe, both as a guest and as a participating artist. As such, you will play an ecstatic dance with music on Saturday evening. What can people expect?

Koch: Ecstatic, Conscious, Free Form or Free Flow Dance – all these terms mean more or less the same thing. Before I got to know these practices, I already knew 5Rhythm Dance, a kind of dance meditation that was invented about 40 years ago by an American called Gabriele Roth. At a young age, Roth had already worked as a movement therapist for hospital patients, senior citizens and at-risk teenagers. At the same time, she aspired to a career as a professional dancer. A knee injury, however, forced her to take a different path towards her true purpose. She arrived at the prestigious Esalen Institute in California, where she first joined the massage team. It was then Fritz Perls, founder of Gestalt Therapy, who saw her potential and gave her the chance to become a resident movement specialist for Esalen group leaders. She started to observe the lack of connection that students had with their bodies and with each other, and found out that dance was a way to break through these barriers.

Agape Zoe: And out of this work came the 5Rhythm Dance.

Koch: Yes, working with thousands of students she studied how different types of percussions and rhythm would evoke different movements in the body. She finally distinguished between five different patterns or energies: Flowing, Staccato, Chaos, Lyrical and Stillness and called it the 5Rhythm Dance. To dance through these five energies in this order within an hour was what she called a wave. I would like to quote Roth at this point: „I have found a language of patterns I can trust to deliver us into universal truths, truths older than time. In the rhythm of the body, we can trace our holiness, roots that go all the way back to zero. States of being where all identities dissolve into an eternal flow of energy. Energy moves in waves. Waves move in patterns. Patterns move in rhythms. A human being is just that, energy, waves, patterns, rhythms. Nothing more. Nothing less. A dance.“

Agape Zoe: What is the connection between what Roth practiced back then and what is called Ecstatic Dance today?

Koch: As far as I was told by veterans of the scene, there were organizers in the USA in the 90s – among the first places were apparently Houston, Austin and Hawaii – who organized the style-forming first events. In the beginning, this had been done with a clear reference to Roth’s spiritual superstructure and similar settings, but with a more free flow and open approach to the accompanying music. Over the years a universal set of rules for the events has emerged and in most cases they are embedded in a ceremonial framework. Very few of those who go to the events today know about the beginnings in the 70s, but the spirit of Roth is somehow still hovering above everything, even if the therapeutic aspect no longer plays this central role. In the past few years it has become worldwide movement bringing together all those who want to rediscover dance as a transformational and healing power, beyond the nocturnal world of experience inextricably linked with the consumption of legal and illegal drugs.

Agape Zoe: This year you celebrate your thirtieth anniversary as a club DJ. How did it happen that you started playing in the Ecstatic Dance scene at the same tim

Koch: For the last five years, I have spent all my longer breaks, between 4 and 6 weeks each, in the Sacred Valley in Peru. Since I first heard of Ayahuasca in the late 1990s, I had carried around the certainty that as soon as the time was right, I would participate in a ceremony in one of the countries of origin of this culture. In 2014 I finally felt ready for it. Since then, this area around Pisac, an hour from Cusco, has become my second home and the community there my spiritual family. At my first Ayahuasca retreat the 5Rhythm Dance was already an integral part, an Ecstatic Dance I attended there for the first time about three years ago. Last year, after my return to Berlin, I decided to research what Berlin has to offer and was astonished to find out that there is already a very big and fast growing scene. Most of the time I was at the so called Ecstatic Dance Berlin, which was founded by Pascal de Lacaze-Duthiers. There I fell for a set by Scott Binder, who btw. played the best sets I’ve heard live so far. Dancing to his music, I suddenly realized that doing what he did, would be what many people from my spiritual community had foretold me years before: That I would find a way to combine my passion for music with my interest in healing and spiritual growth.

Agape Zoe: What experiences have you had since then?

Koch: Last year I spent several months digging myself into this endless universe of music every day for several hours. Out of huge respect for the sensibility of the energies during those dances I wanted to feel 100% secure with my selections of music before I started DJing for them. This process of digging for and understanding all this new music, was and is every day new & infinitely inspiring. Last time I felt such euphoria was when discovering music in the late 80s and early 90s when house and techno first began. In the first half of this year, while travelling to Peru, Mexico and Turkey, I got my first opportunities to play some dances. Now, more and more people are getting wind of it, and also established events are starting to request me. I still feel like an apprentice of this art, but I become more confident with each time in my selection and presentation, in the way I take people on this musical journey and energetic roller coaster ride. Sometimes, I only stand in front of very small crowds but I feel the vibrations of the people and the music so intensely that I get tears of happiness. It is a way that my heart shows me. It gives me so much to be able to offer people this experience. And every time I stand there, I also heal a piece in myself again.

Agape Zoe: How can one imagine such a musical journey?

Koch: I think there is no more eclectic DJing on this planet than Ecstatic Dance DJing. There are no limits actually, everything is allowed and possible, which serves the journey at that moment. In terms of bpm the range goes from 60-160. In the intro and outro phases a lot of music is played which comes from the spiritual and healing scene. Music which is consciously produced for use e.g. in meditation but also in other ceremonial and ritual contexts. Furthermore, World and Roots Music from all continents and cultures, pure vocal music or only minimally instrumented, arrangements consisting only of real instruments. In the last 10 years more and more mixed with elements of electronic music. Pop, Disco, House – you can do it all in the right doses. In the USA, where there is by far the biggest scene worldwide, Trap, Dubstep, Breaks, Electronic HipHop and Conscious Rap are very popular, whereby the lyrics of the latter are not politically or socially critical but rather spiritually colored. With many DJs these styles now account for up to 80% of the dance, with me they rather play a subordinate role, whereby I like to use the kind of Broken beat tracks that stay below 110 bpm and have the sex and funk that I have always loved in African American music. It’s especially exciting for me to discover the whole spectrum of African and Oriental music, as I’ve had almost no contact with it so far.

Agape Zoe: You recently asked us to add the term „Conscious“ to the name of the event, why?

Koch: I have noticed over the last few months that the term „Conscious“ describes the intention with which I go to events, both as a guest and as a DJ, better than the word „Ecstatic“. The term „ecstasy“ comes from the Greek and means „stepping out of oneself“. Don’t get me wrong, I love the ecstatic moments during the dances and at most events they are created very specifically with the corresponding music, I also do that in my sets. But in my eyes, ecstasy is not the main point. At least as important is what is called „grounding“ in spiritual practice, which is why at the end of most dances the music returns to this energy, the participants sit down again or go into Shavasana position and then often a live music performance or sound healing takes place. What I am interested in the most, are the aspects of coming to oneself, of connecting with the inner source, with the divine, and the conscious experience of one’s own body and what the music does with it. Last but not least, depending on how open one is to it, the interaction with the energies of the other participants. So the bottom line for me is to gain consciousness, awareness and (self-)connection through movement.