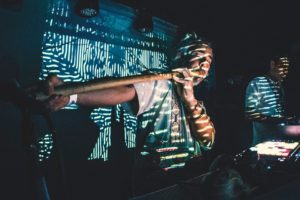 The music of Intiche is a deep fusion of natural organic sounds, traditional instruments and music inspired from various ancient cultures from around the world, funny crazy loops and eternals deja vu.
Experimentation with planetary, spacey, universal waves and frequencys combined with minimal, trance, tribal and electronic powerfull downtempo , uptempo and no tempo beats; lot of fun and the love for sample dance hits.

His sound transports you into the heart of your jungle, over the summit of your own mountain, across the seas of your emotions, flying through space out of your ego and back as we stomp on the grounds of the Pacha mama soil together and shake the spirits to the bones.

It serves as a bridge to connect deeply, with lot of playfulness through the magic of music, frequencies and vibrations.

Born in Southamerica, Intiche is currently based between the forest around Berlin and the city.
His passion for music began some past lives before this one. Playing instruments since a little child, around the age 12, he began to combine instruments with electronic music and mostly everything.

After countless journeys through South America, Africa, Europe and Asia and in and out the universe, he set up his studio in Berlin to dive into the world of self discovering. The electronic music scene adopted him and help him to develop his own unique style of organic electronic music.

Please bring an open heart, wish of enjoy music in all aspects from movement till meditation.