*The Return of Quetzalcoatl 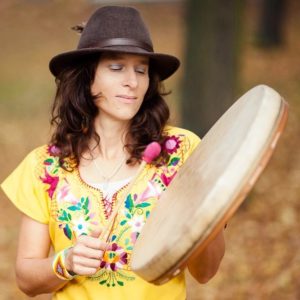 'The Return of Quetzalcoatl' speaks about a Prophecy of the Mayan people that say that the feathered Serpent so called Quetzalcoatl will return in this moment of time as a bringer of peace, harmony and justice.
The prophecy of the return of a Supreme Teacher or Being speaks of Quetzalcoatl, known to the Maya as Kukulcan. However, there is a growing belief that this will not take the form of an actual return or reincarnation, but of people themselves taking on the character and attributes of the Supreme Being through their own spiritual evolution, to the point of overcoming the duality.  Quetzalcoatl is frequently represented as a feathered or plumed serpent, and because of this serpent symbolism, the prophecies of the return of Quetzalcoatl/Kukulcan have important associations with the esoteric parallel of Hinduism's secret knowledge of kundalini and the seven chakras of the body.
Annette will guide you through the Mayan Breath to surrender to the divine within you and all around you. We call upon the universal force of Quetzalcoatl and activate our 7 Chakras. With the rising of Quetzalcoatl on an energetic Level, we will connect with our higher consciousness and with supreme Light Beings. It is an energetic Activation to become aware of you own inner wisdom.
IMPORTANT: This is not a Kundalini Activation or any holotropic Breathwork!

Annette Assmy is a filmmaker, a creative soul, a Mistress of Ceremonies and she is walking the path of an earth keeper. For her it is a heart wish to bring the soul nourishing Inca wisdom to the western world. She learned from The Four Winds Society, by Dr. Alberto Villoldo (http://thefourwinds.com/) and she is certified in Luminous Healing and Energy Medicine. Since November 2014 she is learning directly from the peruvian shamans, so called Paqos at the Serena Anchanchu School in Holland (http://www.incashamanism.com/). She is initiated by them as a Pampa Mesayok; Keeper of the earth.
She is also initiated by Don Oscar Miro-Quesada in the Pachacuti Mesa Tradition.
Since 2012 she is giving Energy Healing Sessions and making group seminars (The Rite of the Womb and Munay-Ki etc.).
And She is a Dream Teacher (Level 2) after the Teaching of Robert Moss.